Center for Research on Sustainable Forests

graduate student Maren Granstrom (the full half hour video can be found here).

The Penobscot Experimental Forest (PEF) is one of 80 experimental forests and ranges nationwide designated by the Chief of the U.S. Forest Service for long-term ecology and management research.  Land for the PEF was purchased in 1950 by nine pulp, paper, and land-holding companies and leased to the Northeastern Forest Experiment Station (now the Northern Research Station) of the U.S. Forest Service as a site for long-term forest management research in the northeastern spruce-fir forest.  In 1994, the industrial owners of the PEF donated the land to the University of Maine Foundation. When the PEF was donated, the industrial owners stated that the mission of the forest is: to afford a setting for long-term research conducted cooperatively among Forest Service scientists, university researchers, and professional forest managers in Maine; to enhance forestry education of students and the public; and to demonstrate how the timber needs of society are met from a working forest. Today, the University of Maine and Northern Research Station manage the PEF under a Joint Venture Agreement.

About 10 miles north of Bangor, Maine, the PEF is in the Acadian Forest, a region covering much of Maine and Atlantic Canada. This is an ecotone between boreal and broadleaf biomes dominated by northern conifers. Red spruce is the signature species. Balsam fir, a boreal species, is at its southern limit, while eastern hemlock and eastern white pine are at their northern limits. Stand-replacing fires are less frequent than in the boreal or other temperate forests. Insect epidemics (e.g., spruce budworm) and windstorms cause sporadic mortality. Most of the forest in the region has been periodically cut since the 18th century; a water-powered sawmill was located on the land that became PEF in the late 1700s.

The Acadian Forest is more compositionally diverse than commercial spruce-fir forests farther north. The canopy is dominated by conifers, including hemlock, spruce (mostly red but some white and black), balsam fir, northern white-cedar, white pine, and an occasional tamarack or red pine. These species often occur as mixedwoods (i.e., in softwood-hardwood mixtures in which neither component contributes more than 75% of basal area). Common hardwoods include red maple, paper and gray birch, and trembling and bigtooth aspen. 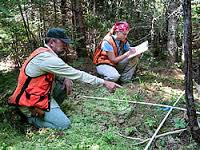 The PEF is home to long-term silviculture and ecology research by the Forest Service (1950s to present) and the University of Maine (1990s to present), contributing to sustainable management of working forests in Maine and elsewhere.  The Center for Research on Sustainable Forests has partnered with the Forest Service to maintain their large-scale silviculture experiments across 1,000 acres of the PEF.  This work includes the Management Intensity Demonstration (1950-present), Compartment Management Study (1952 to present), Biomass (Whole-Tree and Stem-Only) Harvesting Study (1964 to present), Precommercial Thinning x Fertilization Study (1976 to present), and Silvicultural Rehabilitation Study (2008 to present).  Treatments are applied at the stand level and include single-tree selection cutting on 5-, 10-, 15-, and 20-year cutting cycles, modified (guiding) and fixed diameter limit cutting, uniform and irregular shelterwood, precommercial and commercial thinning, and commercial and silvicultural clearcutting. Harvesting operations have evolved over time from hand crews with horse or cable skidding to mechanized harvesting with processors, forwarders, or grapple skidding.  As such, treatment application and outcomes are relevant to contemporary forest management, and measured response variables include a suite of commodity production and ecological variables.

In addition to collaborating on data collection, analysis, and presentation or publication of the results of PEF research, the Center has supported Forest Service research data and archive management leading to the publication of permanent sample plot data from many studies.  As a result, the PEF is a national leader in experimental forest data publication and a valuable resource for researchers worldwide interested in using longitudinal forest data in their studies.  The PEF is also the location of a Smart Forest network installation, linking wireless sensor data collection across sites. 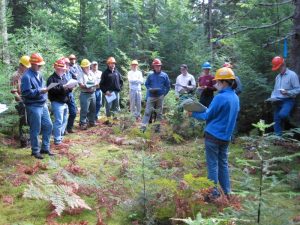 In addition to a number of demonstration areas, the PEF provides opportunities for training and education of University students and others through field tours, workshops, and summer and school-year employment.  Numerous graduate student and faculty research projects have been overlain on the Forest Service experiments, making the PEF a key part of both research and academics at the University.